Required cookies are essential to let you move around the website and use its features, such as accessing secure areas, shopping baskets and online billing. These cookies allow our website to provide services at your request.

Functionality cookies are used to remember the choices you make, e.g. your user name, log in details and language preferences. They also remember any customisations you make to the website to give you enhanced, more personal features.

Targeting cookies collect information about your browsing habits to deliver adverts which are more relevant to you and your interests. They also measure the effectiveness of advertising campaigns.

Save Settings
Accept All

This site uses cookies and related technologies for site operation, analytics and third party advertising purposes as described in our Privacy and Data Processing Policy. You may choose to consent to our use of these technologies, or further manage your preferences. To opt-out of sharing with third parties information related to these technologies, select "Manage Settings" or submit a Do Not Sell My Personal Information request.

The Vitara expresses Suzuki’s SUV styling heritage in a strong looking design. The clamshell bonnet (a hallmark of Vitara models) gives the front end a look of solidity, and a trapezoid motif front bumper indicates powerful grip on the ground. Pronounced body side character lines and bonnet side louvres form motifs are reminiscent of the first generation Vitara from 1988. Suzuki’s pursuit of good aerodynamics is reflected in optimally designed bumpers, in a roof line that slopes smoothly downward toward the rear, in flat underbody surfaces, and in specially shaped side mirrors based on the results of airflow analysis. New LED design headlamps have now been incorporated across the range for the 2020 Hybrid model. This follows on from modifications in 2019 which included a new, more elegant front face with redesigned grille, lower bumper and redesigned rear lamps with a distinctive LED display. 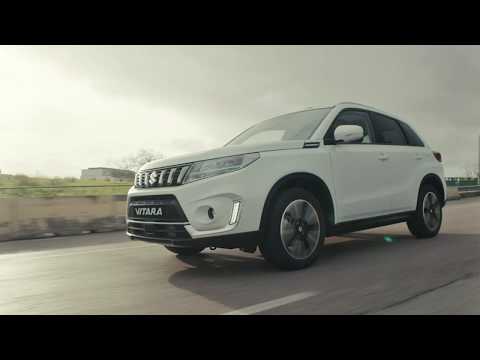 Suzuki evolved its renowned four wheel drive technologies into a new generation that delivers driving pleasure and peace of mind in diverse conditions while promoting economy and limiting the burden four wheel drive cars place on the environment. Suzuki’s ALLGRIP ‘Select’ system is available as an option on SZ5 models and incorporates four driver-selectable modes for safe, enjoyable driving on diverse surfaces. It debuted in the S-Cross model and has proved very successful. In development, the Vitara ALLGRIP system was enhanced by the addition of a feed forward function that allocates torque to the rear wheels before any slippage can occur.

At first launch in 2015, the Vitara was rated one of Europe‘s safest cars according to independent crash testing results from Euro NCAP, and received the maximum 5-star rating. Vitara was also the first compact SUV to earn five stars in the more rigorous Euro NCAP testing programme introduced that year which reinforced the exemplary level of safety of the model. Suzuki’s Vitara was awarded high scores in all four areas of assessment and also exceeded the minimum level required in all of these to attain the five star rating

Get in Touch Your Next Steps
Make an Enquiry
Book a Test Drive
Virtual appointment
Request a video
Company Info
© 2023 Hilton Suzuki
London road, Bishops Stortford, United Kingdom, CM23 4AU
Reg Office: London road Spellbrook Bishops Stortford Hertfordshire CM23 4AU
Reg. Company Number: 3091168
VAT Reg. No. 688538274
Finance DisclosureHilton Suzuki is regulated by the Financial Conduct authority. (FCA No. 307893) finance subject to status. Other offers may be available but cannot be used in conjunction with this offer. We work with a number of carefully selected credit providers who may be able to offer you finance for your purchase.

Whatever your question or feedback we are here to help. So please feel free to contact us

JOIN US ON SOCIAL

Immerse yourself even deeper. Visit our social channels